Todd's Hammer is a system that allows you to transfer certain upgrades on a lower level items onto a higher level item. You can access Todd's Hammer by clicking on the blue hammer icon at the bottom of your inventory 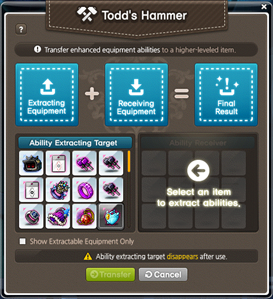 Important: The item being extracted will disappear after you execute the todding process. 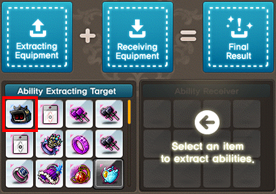 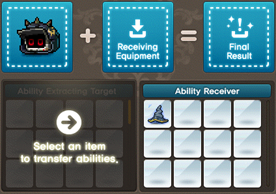 Select an equipment to extract from the provided list (top) and the UI will display all possible equipment that can receive the extracted item's upgrades (bottom).

In order to todd an item, there are a few standard criteria to meet first. For easier reference in the subsequent sections, the item being extracted is termed Extracting Equipment (EE), and the item receiving these upgrades is termed Receiving Equipment (RE).

The table below lists item properties that are/are not transferred during todding.

The majority benefit of todding is on cost-saving -- you save star forcing costs (only need to star back one lost star), and can retain useful potentials you found on items from lower levels by todding upwards.

When todding from low level items (below 100) to higher level items (100+), the potential value automatically adjusts to fit the RE's level. Hence, players do not lose out on any possible boosts if starting early with todding.

Whether you're just starting off and lack mesos, or found an item with potentials you really want to keep, the Todd's Hammer system has proved very useful in making it easier to retain upgrades you want. Once again, do be reminded that todding will cause the equipment being extracted to vanish when the process completes. Be sure to use it carefully and wisely!

Credits go to Nexon and Maplestory for images seen on this page. Thanks also to players in the MapleSEA Discord for helping make the page's information more accurate!

If you spot any errors, please contact whacky#7051 on Discord with the list of corrections to make. Thank you!